"Traveling - it leaves you speechless, then turns you into a storyteller." - Ibn Batutta

After a fabulous month in the bay of Fethiye, we sail west for the first time in years!  The huge marina, just across the bay from the town of Marmaris, is a popular spot for cruisers like us to winter in Turkey.
Our late afternoon arrival allows just enough time to say hello to new friends, get checked into the marina and then enjoy a motionless night's sleep tied to a dock with power and water.  Over the next three months, we plan to get numerous jobs done on TIOGA, have some great school sessions, and relax while we get to know this season's crowd of cruisers. 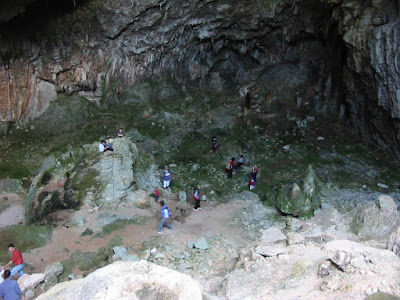 Over the last couple days we learn there are tons of family cruising boats here for the winter.  How awesome it that!  We are told we have arrived just in time for the families' hike to the cave.  The mountain shown behind the marina in the photo above is a national park with lots of narrow roads and hikes to explore.  Apparently, there is a huge cave about an hours hike up that has recently been discovered.  Today, we join the Australian, French and Dutch families in an outing to see the cave and have a picnic lunch.

The cave is massive with stalagmites and stalactites all about and secret passageways heading off into total darkness.

Photos of the dark cave weren't too exciting, but the numerous bee farmers on the way provide an interesting alternate.  Yum...we must buy some of that fresh honey.

For about a week prior to this craft sale, our guys and the Australian kids on s/v All the Colours (Jack 9, Monica 8, and Alistair 6) spend their afternoons making crafts.  They combine their beads from the boats and come up with necklaces, bead animals and tree ornaments to sell along side of the other cruisers' wares.   The moms also bake muffins and cakes to supplement their stock of items for sale.   It's a great experience and they all end up with a tidy little sum of money.

Tonight is meant to be a Christmas caroling night involving all the cruisers on the dock.  Somehow the kids voices attract attention and the families pretty much end up doing the singing with all the other cruisers as an audience.   Good fun as the sweet little voices steal the show.

Friday, December 23rd - Frosty the Snowman and his friends

A lot of the boats here in Marmaris have festive Christmas lights stretched up their masts or hanging in their cockpits.  S/v Moonfleet of Arun a few slips down the pontoon from us,   also have a merry little display of Frosty the Snowman and all his fuzzy friends.   Great job guys!

Tonight, we have a big Christmas eve dinner on board as, tomorrow night, our Christmas meal will be with all the cruisers in the marina restaurant.    Being in Turkey, can you guess what we had ??  (No, we had roast lamb....even better in our books.)

We can hardly believe this is our fourth and final Christmas aboard TIOGA!   We plan to arrive home in Canada in time for Christmas 2006.

Over the years of our trip, we have enjoyed many different Christmas gatherings.  Whether they involved guests on board for dinner or potlucks and beaches, this year is again different.  We treat ourselves and let the restaurant at the marina do our cooking.  A huge group gathers for a delicious Christmas dinner (yes, roast turkey), dancing and overall good cheer.  There is even a surprise visit from Santa Clause himself!  All the kids get to be his helper to pass out gifts to the adults before they get to open the gifts Santa brought for them.

Everyone is enjoying the Christmas break from school with lots of late nights and sleeping in.  There are many activities to keep us busy including a trip to the local bowling alley.  The Australian family from s/v All the Colours joins us for an afternoon of bouncing bowling balls and great gutter rebounds.  There were some pretty nice shots too!

Today our family takes some time to head out on an excursion all by ourselves.  The boys are dying to test out some of the things they bought in town the other day with money sent for Christmas from Grandparents.  We hike up and about and back down to the waters edge on a secluded part of the Marmaris bay.  Joel widdles with his new pocket knife, while Gerrit finds many interesting ways to test out his new Leatherman.

Walking/biking home, we end up back on this road leading to the entrance into Marmaris Yacht Marina.  We comment on what a glorious winter it has been, which is apparently the driest winter on record.  As we enjoy the blue skies and warm temperatures, we can't help but feel our prayers were answered!  Just prior to arriving we were told to expect huge amounts of rain and gray skies.  That would be pretty tough to take for a family from Alberta, Canada, known as Blue Sky Alberta!  So far, so good.

Today John from s/v Guardian brings out all his tools and spends a good chunk of his afternoon helping the kids on the dock build individual boats.  He works with one child and gets them proceeding on their own to the next building steps, before he moves on to the next child and then the next.  Whatever is requested, John makes helpful suggestions and manages to keep the assembly line moving ahead until all the kids have a new boat.    John, being the builder of his own boat Guardian, helps the kids create some very nice little boats.

This little dinghy half full of water provides a great spot to test the new 2006 fleet of Marmaris vessels.  Yeah....they all float!  Except of course Jack's, which is a submarine, so he is pleased it sinks.

Thanks John for all your efforts!

This is the huge cement area for boats on the hard inside Marmaris Yacht Marina that doubles as a playground.  The smooth flat surface is great for biking, skate boarding and games of all sorts.  One of the favorite pastimes are the sword duels that happen daily.  All the kids scramble to be finished school by lunch in order to spend the afternoons chopping each other up as they practice the finer points of swordsmanship.

Don't give up your day job....too late, Chris gave that up almost 4 years ago!   Once a prominent suit and tie guy, now the barber on the dock.  And he does it for free!    Actually, today after he cut Joel and Gerrit's hair (no not the rat tails), Katie from s/v Primavera asked for a small trim.  What the heck...

Well....that's about all to say about January!  Over the course of the winter we have gotten to know the crew of super yacht MuMu while she was on the hard for regular maintenance. They invite us on board for a look around this impressive vessel.
Here our friends, the crew of super yacht MuMu getting ready to go back in the water.  She's 39m / 127' and all luxury, yours for only $US 70,000 per week plus expenses.

We can proudly say we have been on this beautiful yacht :)

Up next in Log 45 we continue to explore and enjoy our time in Marmaris, Turkey.