This blog covers December 19, 2002 - January 31, 2003 as we explore the area around Puerto and Nuevo Vallarta (Paradise Village). With Tioga securely dock tied in this amazing marina, we find ourselves on all sorts of Mexican buses, which offer clean comfortable transportation...though a bit fast and crazy at times.

So we made to Nuevo Vallarta (NV) just in time for Christmas.  NV is really just a resort area about 10 minutes’ drive north of the town of Puerto Vallarta (PV).  PV was first established in 1851 and became a maritime center in 1885.  The 1964 filming of the movie "The Night of the Iguana" put PV on the map when actors Elizabeth Taylor and Richard Burton, both separately married, had a torrid off-screen romance that generated an avalanche of publicity.


We had heard that the marina at Paradise Village was very nice, but not in our wildest thoughts did we realize it was part of and just behind a gorgeous 5-star resort with all hotel privileges at our fingertips but at 1/10th of a hotel guest's cost.  We cool down in one of the 3 hotel pools daily, usually in the mid- to late- afternoon.


December 20th - It had been three weeks since San Diego, so upon arriving in NV we had a number of chores to complete.

We also had to get ready for Christmas, which was not really in the forefront of our minds, especially when combined with passage making, 85 F and sunny skies (i.e. no snow), and no commercial bombardment. What surprised us most as we took the bus into PV for the first time was ... we were heading for Walmart for Christmas supplies and gifts!  Gerrit calls the buses "levitators" because that's what happens to those sitting at the back of the bus in high speeds. Our Christmas shopping trip produced a small, simple tree this year which was just as fun to decorate for the boys.


There were numerous pre-Christmas activities to attend including a cruising kids gift exchange/potluck dinner and a night of Christmas caroling on the dock.

December 22 - We are also super anxious to reunite with our friends from Calgary whom are flying in to visit and spend the holidays with us.

Straight to the beach for fun in the sand and surf with a setting sun.


Later we host Christmas dinner on board Tioga and serve up Mahi Mahi freshly caught a few days earlier.  It couldn't have been a more perfect evening.

Sayulita, at the north end of Banderas Bay, is a funky little Mexican town we visited by bus with our Calgary friends.  In this picture, Mike and Chris have just returned with pollo ascado (grilled chicken) and cervaza for lunch.  After lunch, it was swimming in the surf and relaxing on the beach.

El Centro is geared towards shopping and best seen by strolling about.  A long boardwalk (malecón) follows the waterfront and the side streets are filled with shops and eateries. There is also an open-air market and a main square.  In the background of this photo you can see the cathedral bell tower of  Our Lady of Guadalupe.  The bell tower is a magnificent wrought-iron crown, supported by eight angelic figures.

"The Seahorse" - on the Malecón, downtown Puerto Vallarta

This is just a nice photograph of a boy on a seahorse, a famous sculpture and Vallarta waterfront landmark.

Crepes, Mexican style. Downtown Puerto Vallarta - It's magical at night in most places we have visited in Mexico thus far.  As the sun sets and the off-shore breeze cools things down, out come the merchants, taco stands, street vendors, and the people.  Here a senora makes us crepes in one of the many plazas.  She had as many flavors and combinations as one might find at an ice cream store. 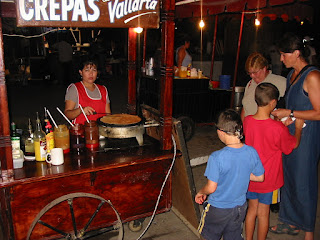 Our friends last day in the warmth before heading back to winter in Canada.  We decide to take them out on a day trip into Banderas Bay to give them a taste of our life on the water.

The plan for today is a day trip by bus to La Cruz de Huanacaxtle, a small fishing village just north of Nuevo Vallarta, for an afternoon exploring the town and a New Year’s Eve dinner at a local establishment called Philoes. Here, a mariachi band extracts our pesos in centuries-old fashion at a beach palapa.

We were invited by the local North Sails sail loft to participate in a small fun regatta to kick-off their purchase of six opti's in order to enable the local kids to learn to sail.  Though the wind forgot to show up for the event, Joel and Gerrit both enjoyed their chance at the helm.  Here Joel races on to secure a 3rd place finish!

Our first major inland trip was a 3-day, 2-night trip to Guadalajara, Mexico's 2nd largest city, with a population of 5 million.  Bus transportation within Mexico is extremely efficient and quite affordable.  Our inbound trip was 6 hours, very comfortable, and time passed quickly.

We arrived just after 1:00pm, checked on the return bus details, and then caught a taxi to the historic center of Guadalajara.  We walked in the historic district and noted the rich collection of colonial palaces and cathedrals, parks and plazas, tree-lined streets, and horse-drawn carriages.


Stores with every imaginable item you might want to buy also line the streets.  Street vendors and street food are the norm everywhere we go, so we begin to piece together a meal as we walkabout among the crowds.  First we have 4 small tacos with spit-roasted chicken, then corn stripped from the cob with mayonnaise and cheese, hotdogs (yikes-up until now we wouldn’t even eat hotdogs from Saskatoon!), then finally each a slice of pizza.


We take a tour in a horse-drawn carriage.

Guadalajara is a beautiful old city that we are all happy we made the effort to get a glimpse of.

We returned by bus to Tioga late on January 6th.

So what did we do for the rest of January?  We're not sure, suffice to say that we had a fairly long list of boat jobs to complete, home schooling, and afternoon's at the pool or beach.  We did end up acquiring two smaller surfboards from cruisers who no longer needed them.  With a little effort, they were soon in reasonable working condition.   Here, Max and Jack from s/v Catitude join up with us and "Instructor Jeff" (surfer and cruiser from Newport Beach, California) for a morning phys-ed class  - surf lessons!

Well, that's basically our journey to the end of January 2003.  Next we head south of PV to explore Mexico's Gold Coast, where the hot and humid jungle meets the iridescent ocean, malaria and dengue fever become a greater threat and crocodiles roam the mangroves.  (Oh fun says Sheila!)


In Log 8 we hit the water again and head farther south down the coast of Mexico.