This blog covers May and June, 2003 where we enjoy the Sea of Cortez with great friends. We explore a  salt mine, visit an old prison and see some cave paintings, make a boat shrine and get ready for RV Tioga mobile.

After a bit of a push to make Loreto Fest  in the first few days of May, we were finally able to slow the cruising pace back down and explore Mexico's Baja treasures in the company of the many great friends we have made cruising.  One of our first stops was the historic town of Loreto, the longest continually occupied town in Baja, having survived almost three centuries.  It is the site of the first mission church established by Father Junipero Serra in ~1743.  This beautiful hotel graced the town square.


A great pizza lunch in Loreto made carefully by a husband and wife team.  A far cry from Pizza Hut or Dominoes!

Across from Loreto is Isla Carmen, an island we circumnavigated and enjoyed thoroughly for a number of  days.  This day is Mother's Day and Sheila enjoys a cuddle with Gerrit. 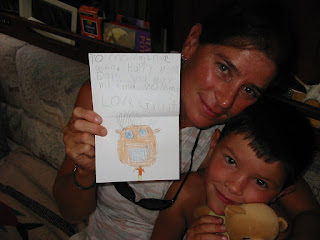 On it was an old abandoned salt mining town and dried-out salt ponds, which we explored.

Learning to dive for and harvest "chocolatie" clams and the subsequent beach-side clam bakes are extremely memorable.

Here Chris is proudly presenting the fish he just speared.

The "cruisers' shrine" is a tree and surrounding area on a beach in an anchorage called San Juanico.   For years cruisers have visited and left artistic momentous of their existences and trips, the earliest we could find dating back to 1988.  We brought along various craft items, paints, string, and pieces of wood and made our own creation.  Our sign is about 12"x16" displaying 'TIOGA” and all our names, “5-03' (May 2003). Our Canadian Flag and Calgary in the top right corner.  Joel added a miniature Tioga in the bottom corner complete with Canadian flag and Gerrit colored a shell to leave for Boomerang, our dinghy.


We chose to hang our creation deep in the tree for maximum protection from the elements.


Joel brought the sailboat he made along for the day and had fun while the shrines were being created. 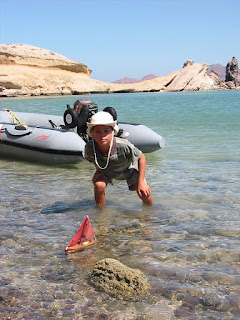 San Juanico was also a great spot to snorkel and marvel at the abundant sea life, as well as the opportunity to practice spear fishing techniques.  A lot of time was spent with John and Nia from s/v Jovita, a great young couple who's overall knowledge of sea life far surpassed ours.  They both turned out to be great role models for Joel and Gerrit on numerous occasions.  Here, John displays his 'trigger fish' and Nia shows off her 'hog fish'.  Both tasted excellent later that day roasted by fire on the beach.

This is a neat picture, if only to show you how we have to get around down here from time to time.  A group of us - three boats' worth in two dinghies - went out for supper at a restaurante in a nearby bay.  After supper, we all zoom home to our anchorage a bay or two south in the pitch dark. It was a nice evening out, with both water and air temperature around 85F.  And the conversation was hilarious! 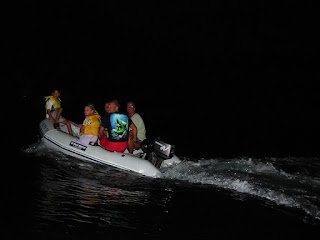 How about this Mexican bug?  We were exploring the town of Mulege's sites when our friends' daughter, Rhianon, spotted this doozy.  It's not a cockroach, but we didn't quite get the name when we asked a local.

In the town of Mulege we visited a unique prison, now decommissioned, where many of the prisoners were allowed to leave the confines of their cells and go to work everyday in the town below.  At 6pm every evening a conch shell was blown to signal the inmates to return to the prison for the night.  When the prisoners were done their prison terms, many of them choose to settle in Mulege having already established lengthy roots!  This picture is of the inner section of the prison, where the hard-cases were kept.  Two solitary confinement cells are on the left.


These "hard-case" prisoners managed to escape and two of them succeeded in stowing away on TIOGA.  They are now holding us hostage and are threatening to keep it that way for at least another 10 to 15 years!!

The crews of s/v's Jovita, Atalanta and Tioga jump in Salvador the guide's van for a day tour to the site of cave paintings by the Cochimi Indians dated 3500 BC.  Along the way into the desert along washboard roads bound for the Trinidad Ranch, Salvador stops and shows us various plants, trees, and cacti of the desert, including how to identify them and their various purposes.  Some cacti hold the key to life - water -  while a single drip of sap from another tree could kill you in the refuge of its shade!  As is with all things in life, be careful of your choices!!

Upon arrival, we hike a short distance though the arroyos and canyons to the cave paintings site. Three different Indian groups painted on the walls over time, some on top of the existing paintings. Pictured were fish, deer, hunters, frogs and even hand prints. The Indians showed the missionaries the whereabouts of the cave paintings, who documented their existence and location. Tragically, the majority of the Indians where wiped out by disease introduced by the Europeans.

Today we planned to make it to the town of Santa Rosalia, not far away but with plenty to see and do along the way.  We had heard via VHF radio that morning that whales were in the area and as we traveled north paralleling Isla San Marcos, we found ourselves surrounded.  We are told that this one is probably a blue whale due to the amount of its body that shows out of the water when it surfaces.   We stop the boat and shut everything down and just drift in order to watch these amazing animals and listen to them blow when they surface.  At one point, this whale surfaces right next to Tioga (within 10m)!

We had heard of a neat spot to swim, and the day's plan was to stop and find it.  The spot  is unique as it is surrounded by cliffs except for a small entrance - a rock arch - that we have to take the dinghy through and under, ducking our heads to pass clearly!  Once inside, there is a nice rock beach to relax on plus small rocks for the kids to jump off of and swim.  Excellent spot. 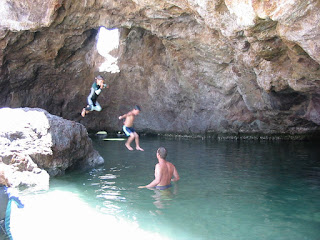 Just outside the entrance, we see some locals jumping into the water from about 30 feet up! Chris and Michael (from s/v Atlanta) decide to attempt it….brave or what?

Finally, we arrive at the little marina in Santa Rosalia.

And no sooner do we get our lines tied when we are boarded by the Mexican Navy doing a random inspection.  They were very friendly despite the size of the guns they were packing!  Apparently, only the sergeant gets ammunition as the Navy can't afford to give it out to the juniors (the kids).  Well, it was a busy day, but it's not over yet. Off we go into town to find out about Santa Rosalia's famous hot dogs!

Gerrit and Joel have a ball burning their school books from the past year.  'The best day of my life!' Gerrit jokingly proclaims.

The evening came complete with graduation certificates for our guys and the girls from s/v Atlanta to officially end our school year.

The last two weeks has been a ton of work getting Tioga ready to sit out the hurricane season, She has been thoroughly cleaned inside and out and striped of everything from flag and sails to running rigging for protection against the sun's harsh rays and summer's strong winds.

Tioga floats peacefully in her resting spot for the next four months. 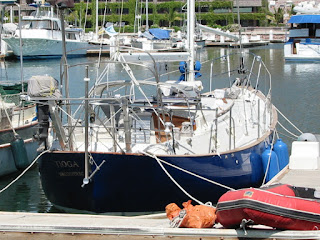 Chris has also been to and returned from Tucson, Arizona with a motor home for our next excellent adventure.  Here we host some fellow cruisers in Tioga II...how many kids can fit in the top bunk?

With everything loaded, we are ready to roll.  It has been a while since we have traveled via wheels.  We start out at 5 m.p.h. and joke about that being the speed we came down the coast at.   Once underway on the highway, we find 55 m.p.h. real fast!!   We are all very excited for this next leg of our adventure.  Stay tuned...