This blog covers from July 18th - September 11th where we have a great time visiting and reconnecting with  family and friends.  From Calgary, to the family farm, Edmonton and out to the west coast, so nice to see everyone.

Well, back in Canada and it didn't take very long to start catching up with friends.   Mike, an avid Volkswagen nut, is delighted with his new Christmas tree ornament.   It's from Puerto Vallarta, Mexico where he and his family visited us last Christmas.


Sunday, July 20th - A surprise get together!! - Calgary, Alberta

Though caught slightly off guard, this surprise get together allows us to visit with many people at once.  The kids pick up right where they left off!

Gerrit's check up with his endocrinologist, Dr. Trussell, allows us the opportunity to catch up with his diabetic team.  We should have been scheduled for the last appointment rather than the first as we apparently put them behind schedule for the entire day!

A tradition when we lived in Calgary was Wednesday night racing.  Though the winds were light tonight, we wouldn't have missed it!


Tuesday, July 29th The Winter Club Pool - we have so many friends to try and see...our life is busier than ever fitting them all in.

Saturday, August 2nd, 2003 Strathmore Chuck Wagon races - we always used to enjoy these races and since we missed the famous Calgary Stampede, Strathmore is a close second where we see all the regular racers including Kelly Sutherland. 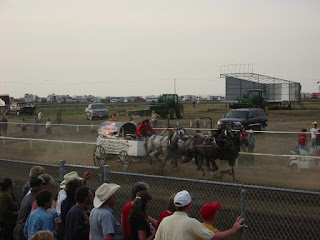 We are all very excited to arrive at 'The Farm'.  Grandma Linde enjoys a long over due hug from Joel.
The farm is in full swing and we enjoy the fresh produce we pick from the garden.  Rookie, the farm dog has been missed a lot too.

Cousins Dylan and Leonard, belong to the local gymkana club.  We are able to watch them compete and enjoy slipping into the western scene once again.

Gerrit's horse 'Pilsner' and Joel's horse 'Chubby' enjoy a rub down after a great ride.

A hot dog roast and one too many root beers on Uncle Wayne and Aunt Kathy's farm.

We often frequented this great festival when we lived in Edmonton years ago, so it was a nice treat to relive some past memories along with Chris' sister Erika and family.


Sunday, August 24th - Sleep Over in the RV - Calgary, Alberta

Joel's friend Randy, along with Gerrit's friend Christopher, slept over for a night in the RV...what a party!

Our arrival to Grandma and Granddad Richards, overlaps the end of a visit from Chris' sister Erika and family.  We enjoy some nice time together and were very glad to find it was blackberry season.
It is cousin Jackie's birthday so the blackberries go to great use....Blackberry Pie.

Prior to catching the ferry off Vancouver Island and heading south into the US again, we have breakfast with John Gray, our Auto Control Medical contact for Gerrit's insulin pump supplies.

We were concerned that crossing the border on the second anniversary of 9/11 would result in long line ups.  There were none.  But that didn't stop a full inspection and interrogation from the US border guards.  Maybe it was the Canadian citizens living on a boat in Mexico, driving an Arizona registered vehicle that had accidentally proceeded through the Nexus Only Lane (express lane for vehicles previously cleared) that caused them distress.  All we know is they kept mumbling, "Nexus Violator, Nexus Violator" and getting us to repeat over and over again what we have been doing over the last year.
Well that is a very quick summary of the great time spent home in Canada.  Catch our next update in Log 14 as we head south, back to Tioga in Mexico, via the western states of the USA.