"Not all classrooms have 4 walls." - Unknown
This Blog covers the month of February 2003. We spend a month of our trip exploring a relatively small piece of the Mexican coast line, called the Gold Coast, because it has long been associated with prosperity, whether for its fishing or more recently for jobs associated with the tourism sector.  This section of the mainland has some of the most interesting cruising to be found in Mexican waters.  In all, our trip from PV to our most southerly point of this season, Tenacatita Bay, was a mere 127 miles.  It is a month of cruising and exploring rather than passage making.

After departing PV, we stayed a few more days in Banderas Bay making trips to Yelepa, La Cruz, and here, Las Tres Marietas.  This is a group of three small islands, which are now a National Ecological Park.  The variety of seabirds, numerous fishes, manta rayes, dolphins and caves such as seen in this photo makes this a facsinating place to snorkel and to visit.

Prior to cruising the Gold Coast, we had to first pass Cabo Corrientas (Currents) at the south end of Banderas Bay.   As shown in the picture, it is a steep, rocky headland about 150m high.  As with other capes we have rounded, as it projects into the prevailing winds, local winds are accelerated causing turbulent, disturbed seas and creating strong currents.  Cabo Corrientas also marks the beginning of the truly tropical conditions - the further south you go the greener and more luxuriant the vegetation becomes.  We were lucky - the wind and seas weren't that bad for our passage.

With Cabo Corrientas behind us and favorable winds and following seas we decide to continue sailing all the way south to Tenacatita Bay, likely our most southerly point for the season.  On our way back north into weather, we would then explore the anchorages missed along the way.  We are very happy to be in this interesting place we have heard so much about.  Everyone is feeling quite exhausted so we make an early night of it, but not before witnessing this spectacular moon rise over this very protected anchorage.

One of the most popular highlights of Tenacatita Bay is the fascinating dinghy trip up a stream through mangroves to a large lagoon.   We leave Tioga just before 10:00am in the company of the families from s/v Lonesome Dove and s/v Mintaka.  We all are in sensory overload as we slowly maneuver upstream encountering mangroves totally grown over us with a navigable tunnel cut through, numerous bird species, and termite huts so large they appear to be black bears climbing the trees. 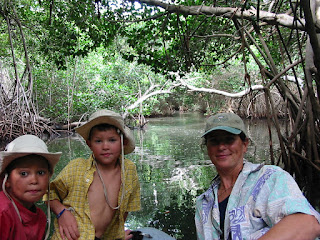 Many crocodiles have been relocated from the area, but not all of them... The kids don't argue much when we tell them to ensure all limbs remain inside the dinghy!


11:03am - The mangrove ride eventually opens up into a large lagoon where we beach the dinghy for the day.   This is clearly a popular spot among cruisers, though two dinghy outboards were stolen from this location shortly after our visit.  The local restaurant owners, most affected by the thefts and subsequent reduction in visits, were quick to react.  One outboard was recovered and a sentry now watches over the dinghies for tips.


12:56pm - Anyhow, a short walk from the dinghy brings us to the palapa restaurants lining the beach on this outer anchorage adjacent to where Tioga is anchored.  The view is spectacular as we enjoy a great lunch, play on the beach and snorkel with moray eels in the reefs  locally known as "the aquarium."  We even manage to replenish our produce stock as a 'veggie truck' selling the local harvest ambles down the street.  A great day which ends all to soon (but repeated twice more).

Whenever Chris takes on school for a day, Joel and Gerrit jokingly giggle that their substitute teacher is Mr. Krupp from the Captain Underpants Series.  Here, Mr. Krupp teaches a very interesting class on electricity and the workings of flashlights.  The boys love this kind of hands on learning no matter who the teacher is!

Today we and the family from s/v Lonesome Dove head off to check out a fiesta in the nearby village of Rebalsito for their annual fair and bull fight.  The walk turns out to be a fair distance, so we are all grateful when a local offers all eight of us a ride.


2:20pm - We mull about the festivities tasting food, buying candy and watching the boys jump on an enclosed trampoline.  Later, we sit down in a semi-enclosed pavilion to enjoy the band and for the free meal and beers being offered.  Can't refuse this one!  We learn the fiesta is an annual event put on by local businesses for their community and organized by the equivalent of a Rotary Club. 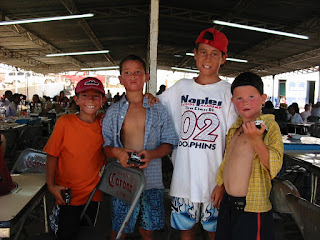 4:23pm - After the meal and a few cervezas, the band suddenly gets up and marches out the door onto the streets and everyone gets up to follow.  I guess that means us, too, so we follow along.


4:41pm - We join in with all the locals dancing in the streets and following the booming band, to where we don't know.  It's easy to get caught up in the excitement even though we were truly outsiders.  At least they are heading down the long road back to where we came from earlier today.  After about 20 minutes we discover they are all heading to the 'Plaza de Torro' - the bull ring.  Yikes, so there really is going to be a bullfight?


6:17pm - After about an hour and half of waiting, the bull fight begins ... or at least bull riding does.  So much for our Spanish!  The cowboy rides the bull.  Then the outriders lasso the bull and stretch it out so the cowboy can dismount safely. After another half hour wait, the second cowboy comes out and so on. We decide this speed would not cut it at the Calgary Stampede.  But this is how their celebrations are done…dancing and loud music between is part of the ritual.   After a couple of more riders, we realize we must get going or risk danger getting our dinghy safely back through the mangroves and through the surf at the other end in total darkness.  This was a great day!

Two days ago, we had received a last minute e-mail from friends in Calgary that they had just left for a week-long stay at the Karmina Palace in Manzanillo, about 50 miles south of Tenacatita.  With not enough time to contact them or to move Tioga south, we decide to do a quick bus trip instead and surprise them.  We enjoy a great reunion with them in this exquisite place, drank one too many margaritas (ouch!) and before we knew it, our visit was over far too soon and we were back on Tioga.  Thank you Dave, Carmen, Danielle and Spencer for the visit. Cheers to a good time, not a long time! 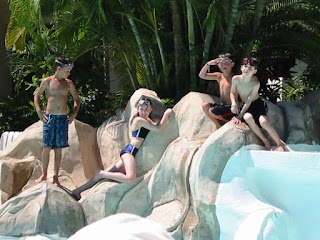 A few days later, a beach birthday party for Joel was a hit with the fellow cruising kids and moms from s/v Mintaka and m/v Anna B.  We had three legged races, spoon races and a scavenger hunt.  Here Gerrit and Tyler sit in the winners circle with all their scavenger pieces.  After an hour or two of running about in the sun, we looked forward to the accompanying pot luck birthday supper in the shade of the palapa. 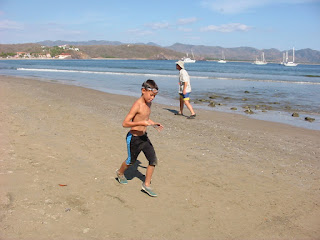 5:21pm - The pot luck birthday supper  was a combined one for both Joel and fellow cruiser Al on s/v Cyrene.  All the cruisers in the bay were invited so there were many interesting and appetizing dishes.  After a huge dinner, Chris lights the candles on the cake Sheila and Gerrit baked and decorated earlier.  Everyone joins in on a hearty 'Happy Birthday' song and voila...Joel is officially 9 years old (well in 4 more days that is)!


6:36pm - The party continues into the evening with musical instruments and song (well, at least until the noceams come out).  Tenacatita has been a great place to stay and and a great anchorage.  I'm sure we'll be back next year on our trip south again.  But more now, after three weeks, it's time to head back north.
PS - note in this photo the age of these cruisers.  We have ran into a surprising number of younger people out cruising - the demographics are changing!

Join us in Log 8 as we begin our journey back north to eventually cruise the Sea of Cortez for the spring and summer.