Log 31 - Welcome to the Netherlands and Happy 11th birthday Joel

This log covers Mid-January to the end of February, 2005, including a trip to Holland, Carnival in Cadiz and Joel's 11th birthday.  Lots on the go.
Wednesday, January 12th - Trip to the Netherlands
Well, here we go again on our next adventure!  A little family history tells you that Sheila's father was born and raised in the Netherlands, but as a young man, he immigrated to Canada.  His brother and most of his sisters along with their families remain to this day in his homeland, whom we were hoping to visit over the winter.  When an invite to Uncle John and Aunt Mies's 50th wedding anniversary was presented, we accepted.  We leave Tioga at 6:45 am and drive about 1 hour to the airport in Jerez, just south of Seville.  Our 9:30am flight is on time and just before 1pm, we have landed in Hann, Germany, where our rental car awaits and the four hour drive to Sheila's Uncle John and Aunt Mies's home in Almelo, Holland, goes off without a hitch.
Thursday, January 13th - Holten Canadian War Cemetery
After a great welcoming last night, and relaxing with warm tea this morning, Uncle John takes us on a drive through the country side to find the Holten Canadian War Cemetery.  Canadian soldiers played a key part in helping regaining freedom for the Dutch from the Germans, within weeks of the end of the second world war.  This cemetery stands as a reminder and honour to all the brave men who lost their lives.
Headstones at the Holten Canadian War Cemetery 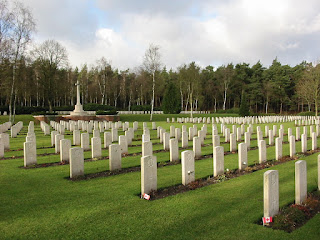 A book at the front gates to the cemetery contain the names and location of every person buried here.  We search out some from Calgary and Edmonton, and even find a Private Richards.
It was exactly 20 years ago that a much younger Chris and Sheila, visited this exact site.  It felt good to now show it to our sons.
Saturday, January 15th - 50th Wedding Anniversary
In the early afternoon, we head off to the nearby community of Weirden, for the party.  Gathered together were family members, neighbours and close friends all to celebrate the 50th anniversary of Sheila's Uncle John and Aunt Mies.  It was a lovely evening filled with warm hearts and good food.  A great bonus was that all of Sheila's aunts and uncles were there, as well as some cousins, so it was a great opportunity to touch base after so many years.

Monday, January 17th - A trip to Lemelerveld and Great Grandparents Grave
This afternoon is spent driving to the small town of Lemelerveld, where Sheila's father (Gerrit) was born.  We visit the house he lived in, and then head off to the grave yard in search of his parents' grave sites.
Not knowing exactly where the grave sites are in the cemetery presented an  interesting game of search for our family.  Finding the graves had quite an impact on Joel and Gerrit.  They have always heard about their European descent, and now it was real!
Tuesday, January 18th - Bike riding the canals of Holland
For our last day in Holland, Uncle John has managed to gather four bikes for us to use.  What a treat as Sheila is especially missing her bike back in Canada. 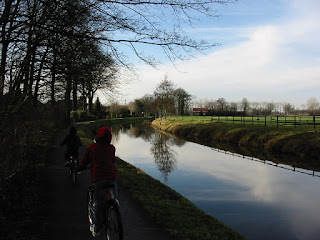 We head out on a glorious bike ride along the canals in warm sunshine, apparently a rare thing this time of year. Our week here has gone far too quickly, and yet we are very happy to have reconnected with uncles and aunts as well as some cousins and their families.  Between invites for suppers,  family gatherings and even one birthday party, we have had a great visit.  It will not be 20 years before we return again!
Saturday, January 29th - Back in Seville - Mid Winter Picnic at Parque de la Corchuela
Once home to Tioga after our Holland visit, we spend the next few weeks basically living in Seville.  Time flies with a regular school schedule combined with boat projects and life in general.  This day has us reliving the past from when we lived in Calgary, where we always ventured out of the city for winter picnics in the snow.  We are told of this great park just south of Seville, so in keeping up with traditions of the past, we head out complete with hot dogs, munchies and cold drinks.  The boys bring their machetes, and while waiting for lunch, they boldly hack the wild prickly pear cactus growing everywhere.  Hummm...the only thing missing is snow...do we look like we care?

We are told the city of Cadiz may well be the oldest in Europe, so we decide to visit on the weekend of its Carnival.   Apparently no other Spanish city celebrates carnival like Cadiz as it turns into a 10-day singing, dancing and drinking party, where everyone dresses up and has a good time.   We are told the big carnival parade is on Saturday, so we head off for the day.  We find the city is one of decayed grandeur, now being restored, crammed on to the head of a peninsula.  Unfortunately the big parade is not until tomorrow so we get a room and spend the night weaving the narrow streets admiring beautiful costumes like this tiger lady.  We explore about on Sunday waiting for the parade, only to have it rained out!  A bit of a wash-out weekend in Cadiz.
Tuesday, February 15th - Spanish Lessons
With the decision to stop in Spain for the winter, came the desire to speak the language better, thus the search for a Spanish instructor began.  Some other cruisers on the dock told us the story of them arriving in Seville 20 years ago and wanting a Spanish instructor for them and their 2 children.  The young lady that came to teach them Spanish, ended up marrying their son!  They asked her if she would once again be interested in teaching Spanish, and so began a great relationship with Maria Angeles.   Along with the Norwegian family on the dock, we had 2 hours of Spanish, 3 times per week.  The kids were first for about 50 minutes, and then us adults would finish off the remaining time.   Maria was a fabulous teacher whom we all learned a lot from.  Muchas gracias Maria!
Wednesday, February 23rd - Medieval construction class
While in Seville, our guys are introduced to what appears to be one of the favorite pass-times of European kids.  It is called War Hammar and the kind our guys latch onto stems from The Lord of the Rings movies.  It involves painting in extreme detail, miniature sized characters from the movies, complete with chain-mail, swords and shields.  All this painting of tiny swords and such, conjures up images of personal weaponry for Joel and Gerrit.
What begins with a trip to the local building store, ends with beautifully crafted, individualized swords and shields complete with personal coats of arms!  Now there's a wood working class that attained full attention.
Friday, February 18th - An early birthday party for Joel'
Though it's technically not Joel's birthday until the 27th of the month, we plan an early party as the boys from the Norwegian boat s/v Stroller are going home for a few weeks and, two other boys from the English s/v Cordelia who have been at the dock for a week or so, are also leaving.  What better way to burn off the energy of 6 cruising kids....take them to a skate board park!  Our guys have scooters, the Norwegian boys, Ula and Henrik, have roller blades, and the English boys, Ed and Al, have bikes and one skate board.   Over the course of a few hours, they have traded and swapped in every combination possible and have had a ball!  Oh, note the cool art form on this ramp.  The entire skate board park is covered in this creative work.
Past experiences showed the need to arrive at the park very early in order to have it to ourselves.  It can get a bit dicey once the older, more experienced crowd shows up, so here's the team photo after numerous wipe outs, jumps and stunts, before heading home to Club Nautico for hot dogs and cake.
Hot dogs and cake at Club Nautico
The patio at Club Nautico provides the perfect place to curb the appetites of the hungry crew of skate boarders.   After a lot of hot dogs, we have cake decorated with the names of Joel, and Ed and Al from the s/v Cordilia.  Coincidentally, Joel shares the same birthday as Ed, and Al's birthday was a few days ago.  Happy Birthday guys!
Well, Sheila is off next week for a quick trip home to Canada leaving Chris to be Mr. Mom, Captain of the good ship Tioga and school teacher...Yikes!
Check out log 32 where we experience the glory of Semana Santa (Easter) plus a bullfight in this beautiful Spanish city of Seville.