This log covers October 15th to November 30th, 2003 where we head inland to take in Mexico's Copper Canyon at Creel.  Then it's back to s/v Tioga for final preparations for our next cruising season.

After dropping off an RV full of boat supplies at Tioga, we headed south and inland with the RV for a couple of weeks.  We passed this shrine along the way, which we found out to be one of many shrines in Mexico of the Virgin of Guadalupe.  In 1531, the Virgin Mary appeared to Juan Diego, an Aztec peasant just north of Mexico City.   Subsequently, devotion to the Virgin among the indigenous spread rapidly, and within six years 9 million Indians had been baptized as Catholics in central Mexico.  As the patron saint of Mexico, the Virgin of Guadalupe is revered by millions of Mexicans.

Our first destination inland was the beautiful colonial town of Alamos.  In the late 1700s, it was the supply and cultural center of this once rich silver mining area.  Today, many of the impressive colonial homes and other buildings have been restored.  The town square or Zocalo is always the center of activity and we're in search of yet another great taco!

Poking around Alamos's narrow cobblestone streets, we stuck our heads in this business' door and watched as they made wheat tortillas.

Many homes in Alamos with traditional interior courtyards have been beautifully restored and are available for viewing.  We stumbled across this one, now owned by a Canadian women from Vancouver.   Now operated as an Inn, it turns out to be the birthplace of Maria Felix, Mexico's most famous and fibrant actress.  Our host told us how late one night last April the shutters banged for 3 hours with no explanation.  The next morning, she learnt that Maria had died that previous night.  Try Casa de Maria Felix for an unique getaway!

Mexicans take music very seriously and it is a most noble profession.  These students performed at a nearby hotel and were so good we bought their CD.  The age range in the group is from 12 to 27 and it is, in a sense, an apprenticeship of learning.  Though they were all very talented, the young man playing the tambourine did amazing things with such a simple instrument, it was literally flying with his fingers!

After Alamos, the next stop for us was the town of El Fuerte, where we left the RV and caught the Chihuahua-Pacific train, which runs deep through some of the most rugged and scenic terrain in the country, connecting Los Mochis on the Gulf of California to the state of Chihuahua. Also known as the Copper Canyon railway, the line has 39 bridges and 86 tunnels along its 655 km (407 mi) route.  Our destination was the old mining town of Creel, a popular base from which to explore the Copper Canyon.  On the train, we were able to walk between cars and stop to view the sights while standing outdoors.  Talk about your 'Old Western' movie feeling!

Covering an area four times the size of Arizona's Grand Canyon, the Barrancas del Cobre region is spectacular.   While the Grand Canyon is the result of downcutting by a single river through a region of massive uplift, the Copper Canyon is the work of many rivers cutting through the craggy, forested mountains creating a series of five interlocking canyons, covered in snow during winter and exploding with color during the rainy summers.

High amid the stunning peaks and gorges of the Sierra Madres, lies our destination, the small village of Creel.  For the two nights we spent here, we stayed at Margarita's Casa, somewhat of a convergence zone for international backpackers.  It was a neat experience mingling with the many young travelers.  It reminded us of our trip to Europe in 1984/85.


Lack of infrastructure makes the area difficult to explore without a vehicle.  Through Margarita's, we arranged a tour into the countryside, winding down some of the countless dirt roads that connect the remote corners of the vast canyons and catching some great views.  Fifty thousand Tarahumara Indians still live in the mountains surrounding Creel, living the old way as they have done for thousands of years.  We see their huts and corn fields often.  Theirs' was never a big civilization like the Aztecs or Mayans but they managed to ward off all the Spanish incursions until well into the 20th century.

Well the trip to Creel and the Copper Canyon was quick, but we have a long 8-hour train ride back to El Fuerte and the RV.  All in all, we're glad we made the excursion.  Thankfully, we made a taxi reservation before we left and our driver, Alahondra, is waiting at the station for us when we return late in the evening, tired and cold after a long journey.   The next day, we leave El Fuerte and head back to San Carlos and the boat.

Not knowing if we'd find pumpkins in Mexico, we bought a couple before leaving Tucson. 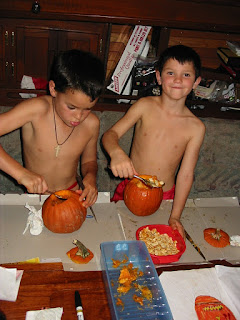 On the big day, we carve them to the sounds of  spooky music CDs before we trick or treat with three other cruising families in a local neighborhood.  In Mexico, this day is El Dia de Los Muertos; The Day of the Dead.  It's followed by All Souls' Day to commemorate the deceased so they might "rest in peace."  Popular belief states that on the Day of the Dead, the spirits of the dead return to commune with the living.  Families leave offerings for these spirits, attend fiestas dressed in costumes, and clean or decorate the graves of deceased family members.  It's a very important Mexican holiday.


November - getting the boat ready for another season

Well, enough for play. The month of November was an incredible amount of work for us.  In addition to unloading the RV and getting it ready to sell, we had to haul Tioga out for new bottom paint and to raise her waterline.  Then we had a number of storage projects to complete, provisions to put away, repairs to make, drop the RV in Tucson, etc. We don't know where the time went, but when it's all done, we're feeling good about Tioga, our home.

Sometimes, when you're working so hard on getting the boat back together, you forget where you are.  Here, Joel & Chris take time to do some early morning fishing, trolling off a nearby rocky point.


Joel went out fishing pretty much every morning with a local cruiser on the dock.  Here he and Gerrit display his latest catch.  Our freezer is now full with these great tasting yellowtail jacks that Joel managed to catch every time!

Well, that's the end of this log.   Chris made it safely back from Tucson, after dropping the RV at a consignment lot.   From a hill overlooking the marina where Tioga sat for the last four months, we ponder the upcoming cruising season and are excited to get going.  We've got 4000 miles to do this season, through Central America including a transit of the Panama Canal, then up to Florida.  Perhaps another year from now we'll be in Europe.  Time will tell.