"Every day we make deposits in the memory banks of our children" - Charles Swindoll
This blog covers September 2nd-25th, 2002 in the San Francisco Bay area as well as a motor trip up the San Joaquin River into the Delta Region.

We arrived in the San Francisco area on September 2, 2002 after a 9-day offshore passage from Vancouver Island.  Here is a view of San Francisco from across the bay in the headlands above Sausalito.  The Golden Gate has a $5 toll when crossing towards downtown, an expensive commute for those working downtown!

Chinatown was a happening place with some cool shopping and a great start for exploring San Francisco.  We had a beautiful day, in the high 80s.


Food sampling doesn't get any better...

Rather than eating a sit down meal, we wanted our day to be filled with different tastes.  Here we take a quick break to eat Chinese-style BBQ pork and ribs.

The San Francisco cable car system is the world's last manually operated cable car system. There are four cable car routes and one central power plant driving massive electric motors, which move the cables running beneath the streets.  The cable cars grip the cable to go and release it when they want to stop.


No experience is more uniquely San Francisco than a ride on a cable car.

When you think of San Francisco icons, the sea lions are up there with the Golden Gate Bridge.  They are one of the reasons why Pier 39 is the top-attraction in San Francisco.  On a typical day, you can find them lounging in the sun or piled on top of each other on K-Dock in Pier 39's West Marina.


Other modes of transportation...

Scooters for the boys have been an excellent mode of transportation so far on our trip.   Joel and Gerrit agreed, especially whipping down the very steep hills in San Fran!  We were able to cover many miles as a family, to the point where we all wore out at the same time.

The infamous Alcatraz Island looms in the haze over San Francisco Bay.   Afternoon winds on the bay often top 30kts.

In the middle of the bay, just northwest  of Alcatraz is Angel Island, which has a very interesting past.  This particular cove  (Ayala) was home base for the Spanish survey vessel San Carlos, whose crew surveyed the entire San Francisco bay area for mapping purposes.  Later this Island became a major depart and disembark point for the US Armed Forces during the Cold War.  It also served time as a quarantine.  Tioga is anchored in the background, behind Gerrit's head.


We hike the perimeter trail, which offers views of the entire San Francisco Bay along the 5.5 mile loop around the island.

San Francisco Bay is fed by both the Sacramento and San Joaquin River systems.  The area is called the Delta Region and we decide to motor up and check it out.  We have to pass under some pretty significant bridges....it feels like our mast will touch, but in the end we clear with distance to spare. 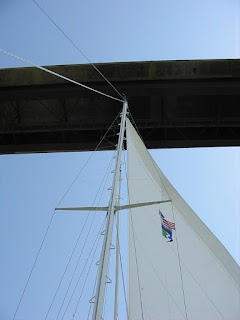 There are hundreds of miles of navigable water made possible by a massive system of levees and dikes.  The delta area is largely agricultural, with farmers' fields some 30' below the water level in the rivers and levees.

One of many anchorages in the Delta, we anchored here twice.

The water was both fresh and warm, perfect for swimming in the 90-100F temperatures we had. We all love swimming in the super warm water and end up spending 10 days in the Delta region.

While you may have thought we were lazing about living the life of Riley, we were using our time in the Delta to get settled into our first ever home-schooling routine with the boys, about a 3 hour per day endeavor.  Here, Gerrit works at a math assignment at the table in our main cabin.

While Joel and Mom work on reading in the back cabin.  What a change from traditional schooling.


Science experiment #1 - where does popping corn come from?

Way down a bank at the Potato Slough, we discovered enormous fields of corn.  The boys were certain that the corn should pop, so we collected a sample and brought it back to the boat for subsequent scientific testing...

The boys later discovered in the Benecia Public Library that what we had was "dent" or feed corn.  The other two types of corn are "sweet" and (yes) "popping" corn, with the latter discovered by the Indians years ago when a kernel left by a fire exploded into a fluffy piece of popcorn.

The trip into the nearby town provides the opportunity for ice cream...a welcome treat in the heat.

Back in Sausalito prior to leaving the Bay area, here we conclude Sheila's 40th birthday celebrations on a friend's boat with (finally) a Pina Colada!

Today, we departed San Francisco in thick fog after 3 weeks of great weather.


Join us in Log 4  where our next destinations are to the south on the way to Disneyland and San Diego, with ports of call including Santa Cruz, Monterey, Santa Barbara, and Newport Beach.

"Please understand, we have been waiting to leave ever since we figured out that there were SAILS willing to take us anywhere we wanted to go." - unknown
This blog covers August 23 to September 02 2002, which was our first serious multi-day passage from the west side of Vancouver Island direct to San Francisco, up to 170 nm offshore and 8 days of sometimes very rough sailing.

14:04 Friday, August 23rd 2002
Wayne arrives in Ucluelet from Calgary all smiles. He's packing a larger steering oar for our Cape Horn wind steering system. We still had a number of jobs on our job board to prepare TIOGA for the offshore passage such as packing away the dinghy, storing solar panels, and lashing things down, so we got straight to work.

Sunday, August 25th 2002
All things that an angry sea might want to tear off are packed below, weather cloths to keep us dry installed, dinghy lashed, food and cabin prepared, and a favourable forecast. We departed Ucluelet at 11:00am after fueling.

Monday, August 26th 2002
Our second night at sea, and still not much for wind. Here Wayne entertains the crew with some pretty good Monty Python impressions ... like the man with three bums. Alright, now, give us a look!


Saturday, August 31st 2002
A few days have passed. We didn't much feel like taking pictures during our first gale. Seas and winds had been building throughout the week and kept us busy and on our toes or in our bunks. On Friday night it culminated in a gale with 50kt winds and really really big seas. We hove the boat to for 6 hours and kept in touch with the US Coast Guard during the worst of it then carried on the next morning. The boys handled the voyage extremely well, though Joel didn't think Mom should use her "good" life jacket if we had to abandon ship. TIOGA was rock solid for the entire trip and kept the crew safe and dry.


06:39 Sunday, September 1st 2002
Joel looking tired after an early morning watch with Mom and a spectacular night of stars. California's in sight!

07:00 Sunday, September 1st 2002
It's a tequila sunrise! California from about 10 miles offshore. But we still have to sail all day before dropping our anchor in Drakes Bay. 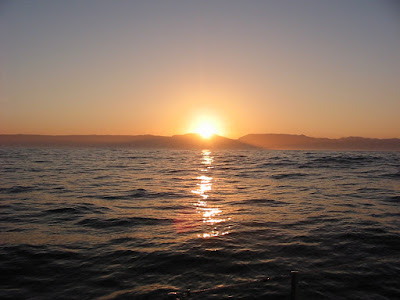 19:57 Sunday, September 1st 2002
And a tequila sunset! But hey, lots to smile about! We're going to make Drakes Bay with a smidge of light still in the sky, a night's sleep for the entire crew, and a break from the constant motion. Maybe even a game of crib and a beer!

Monday, September 2nd 2002
The Golden Gate is in sight and out come the Kazoos for Joel & Gerrit. Now why didn't we bring those out sooner?


In Log 3 we get to spend some time in The Bay area.  So much to see and do in this new life we are still figuring out.