Log 09 - Bahia Tenacatita to Mazatlan then Across the Sea

This log covers March 2nd to April 7th, 2003 where we begin to head north from the beautiful Tenacatita Bay and into the Sea of Cortez for the spring and summer season.

The prevailing winds in Mexico this time of year are NW, down the coast.  So as we begin our journey back north to eventually cruise the Sea of Cortez for the spring and summer, the wind will be hard on our nose, which can cause tiring days in apparently rougher seas.  Our plan of stopping in the anchorages missed on our downwind shot for Tenacatita Bay turns out to be very smart as they are all welcome sights after long, hard days pounding north.

This photo is courtesy of s/v Maajhi-Re as we buddy boat north together.  Don't worry, Tioga is not sinking!!  She is merely pounding down from one wave and her nose will soon pop up to plow through the next one.  We are currently using only our main sail and little stay sail as the winds are up a bit and the boat would be overpowered with our bigger genoa out.   Our dinghy is hanging off Tioga's stern on davits.  Generally, for any type of overnight passage or potential rough weather, we lash the dinghy upside-down on our front deck to keep it from getting swiped away by an angry wave.

Chamela is our first stop and we end up staying for the better part of a week as we wait for high winds and seas off Cabo Corrientes to subside.  It is a great spot where a couple of local boys watch for us each day to come ashore and play soccer.  Chamela is a simple town with basic provisions and friendly people.

School this morning is a field trip to find the local church and attend an Ash Wednesday service.  It turns out to be a long, hot walk to find it so we are glad we left so early this morning.  Many Mexican churches are unique (or sometimes just incomplete) with their open walls and windows, which doves and pigeons freely fly in and out of during services.  No need for central heating here and air-conditioning is just that!  We leave Chamela on March 8th for Punta Ipala just before dawn along with six other boats.   It is like a wagon train of masthead lights following each other safely out and around the reef on the point.


After anchoring and resting for the night at Punta Ipala, we depart just before dawn and tackle Cabo Corrientes once again as we come from the south.   Joel and Gerrit entertain themselves with numerous activities while we travel and they have become quite imaginative.  Here Captain Cheerios makes an appearance just as we drop anchor in La Cruz after a long day of sailing.   La Cruz brings us back to Banderas Bay where Puerto Vallarta is a short bus ride away.

We decide to stay for a few days in the La Cruz area, so we must check-in with the local port authorities.   There are various jurisdictions along the Mexican coast, each having their own port captain and the law requires a vessel to check in and out of each one as you move along.   Of course, there are the associated fees that go along with both checking in and out, so sometimes creative selection of an anchorage will allow us to skip the fees here and there.  We spend a few days here re-provisioning, exploring, and (of course) a trip back to Paradise Village for a swim and supper.  We leave La Cruz early on March 13th and round Punta de Mita, bound for Chacala then the island Isla Isabela.


After a night in the quaint little town of Chacala, we raise anchor at 4:00 am and push on in order to arrive at Isla Isabela in daylight.  We have had great winds all day but as we alter the course to make this island, we have 25 knots of wind on the nose!  Time for the 'iron genny' (our motor) to punch through the wind and waves.


Anchoring is nerve wracking in the high winds with rock pinnacles all around and the notes in our chart book telling us this spectacular anchorage is known as 'the anchor eater'.  We attach a buoyed trip-line to the crown of the anchor in order to help in the retrieval process if the anchor fouls.  As we settle in, tucked behind the pinnacle rock stacks, everything settles out, the wind dies off and we are set for our stay.

This wild and rugged island is an uninhabited National Park except for a Warden who oversees this magnificent bird sanctuary and seasonal fishermen with camps on the beach.  It is a natural wonderland that was once featured in National Geographic.  It boasts the clearest water we have seen yet, tropical fish swimming all around our boat, and whales rising off our starboard side as we eat breakfast.

Here is a mini-tour of our time on shore.  What a privilege to be able to access and explore this amazing, wild island teaming with all sorts of birds, iguanas and various other wildlife. 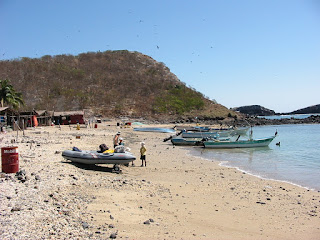 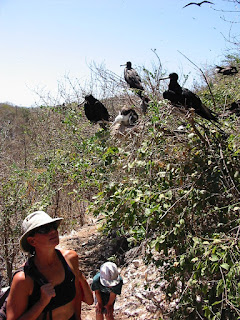 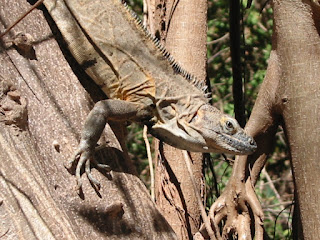 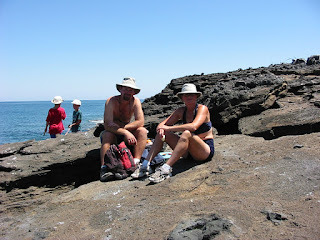 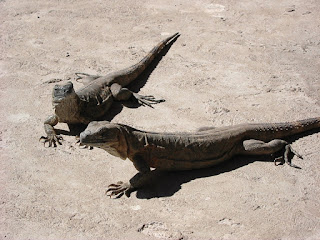 Most of this day is spent in the water snorkeling and marveling at the sea life.  The colors are the best yet and it is hilarious to hear the excited shrieks and gurgles of Joel and Gerrit through their snorkels tubes.  But it's time to leave.  We have been receiving deteriorating weather forecasts via various HAM radio networks so we need to push on.  By leaving Isla Isabela late in the afternoon, we plan to arrive in Mazatlan early the next morning and be safely anchored in the well protected commercial harbor before any serious weather hits. We enjoy a fabulous sail for the most part and slide into harbor just after daybreak.  In the last few hours, we were already beginning to feel the effects of the storm as predicted.

Our passage to Mazatlan was uneventful arriving just after daybreak.  All night long we had been guided by a bright light that seemed to be going to Mazatlan as well, but which we could never seem to catch up to - until we realized it was the lighthouse!


A short mini-tour of our time in Mazatlan. 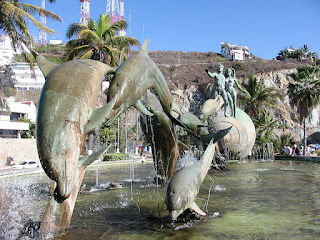 We find the Sea World of Mazatlan and enjoy the shows. 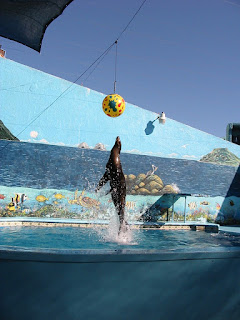 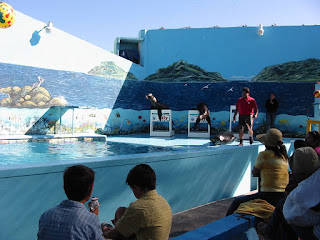 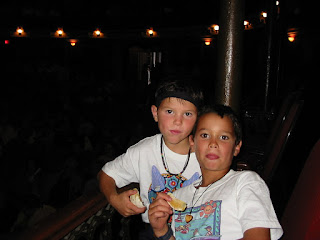 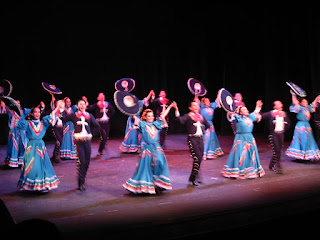 We even take in a theater performance.  Very colorful from our balcony seats.

All good things must come to an end, and once again our thoughts began to focus on executing our next passage from Mazatlan over to the Baha Peninsula.  We had done most of what we needed or wanted to do in Mazatlan, and when we finally got our weather window (and our port clearance papers), we headed out.   The passage took a couple of days mostly hard on the wind.  Pinching as much as we could to make our northing, we managed finally to make landfall at beautiful Bahia de Los Muertos, which means Bay of the Dead - but far from it!

As you can see from the last panoramic photo, this bay is popular with the fisherman.  This fellow here sold us delicious red snapper fillets (carcass in the panga) then posed for a few photos.  Here he holds up a male "California sheephead", a very good eating fish as well. 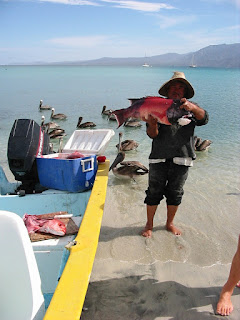 Another Catch of the Day

The boys have some fun in a nearby beach restaurant, still in Los Muertos.   Note that the sign says "Bay of Dreams," not the Bay of the Dead.  Must be a marketing ploy to get gringos from Cabo San Lucas to visit!

Well, the weather forecast looks favorable to head north again and around the corner to La Paz.  We have definitely left the tropical south for the more arid, yet very beautiful, Baha cruising area.  Spring is in the air, cacti about to blossom and in our next logs we'll explore the brilliant waters of the Sea of Cortez.


Join us in Log 10 where we cover the Sea of Cortez from La Paz to Puerto Escondito and Loretto Fest.